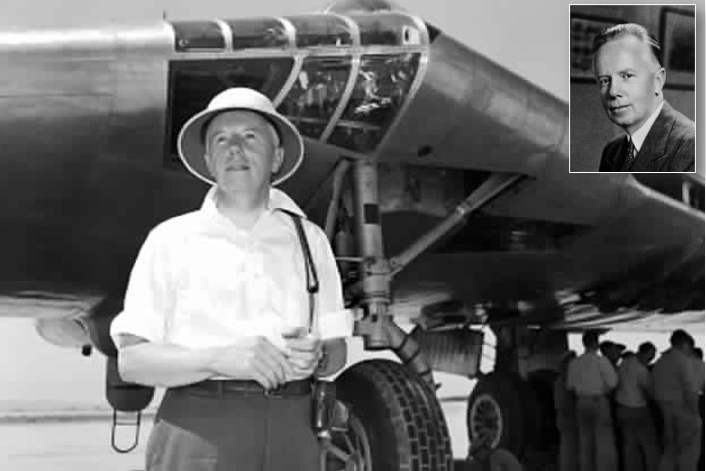 The link is Quetzalcoaltus Northropi, the largest flying dinosaur that ever existed. It reached the size of a 4 seater plane (10-12m wingspan). This pterosaur populated the air in North America during the Late Cretaceous period about 80 million years ago. Quetzalcoaltus Northropi was named in honor of the Inca god Quetzalcoatl, the “feathered serpent”, and of Jack Northrop, an immense aeronautical engineer, builder of the largest flying wing in the aviation history, the Northrop YB 49 (right illustration).

Trained at Lockheed, whose fame he ensured with the Lockheed Vega, of revolutionary construction, Northrop later joined the Douglas firm and contributed significantly to the success of the DC3, whose wing he designed. He founded his own company in 1939. It was then that he undertook what would be his life’s work, building flying wings. Indeed, for him, the flying wing represents the ultimate aircraft, that is to say the one whose entire surface contributes to the wearrance. His grail will be the creation of the XB35 bomber, which became YB49 following the replacement of the complicated piston engines of the XB35 by more effective Allison turbojets. With a wingspan of more than 52 m and flying at 800 km/h for a range of 5,500 km, these exceptional performances for the time (1947) did not offer the aircraft manufacturer the consecration of a mass production despite the discovery of a reduced radar signature testifying to the stealth of the device. Indeed, the US Air Force sought to impose a merger with its competitor Convair, on unfavorable conditions for its business. Faced with his refusal, the Secretary General of the US Air Force, responsible for the project, then ordered the destruction of all the remaining YB49s, for the benefit of the competing aircraft, the Convair B36 peacemaker which would then be selected and built in series. Some time later, this same general secretary was recruited by Convair as president. Following this failure, Jack Northrop withdrew from the firm he had founded and left the aeronautical industry to devote himself to the manufacture of equipment for disabled people. At the end of his life, Jack Northrop will finally see the success of the flying wing formula that he had so sought to impose. The US Air Force indeed invited him to the presentation of the Northrop B2 stealth bomber, a flying wing. Jack Northrop died shortly thereafter in 1981 at the age of 85. The failure of his flying wing was the greatest regret of his life.